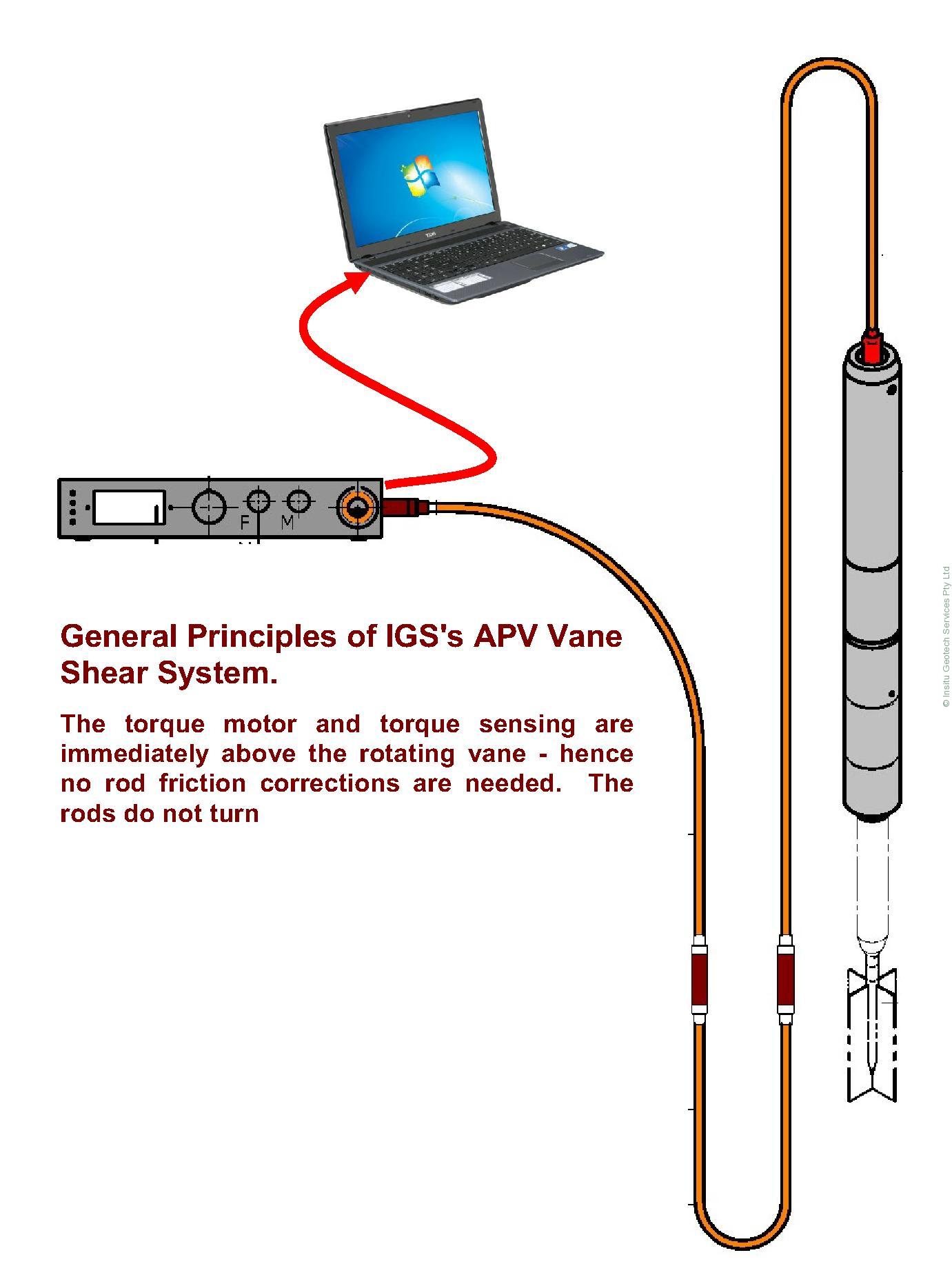 IGS undertakes Electronic Vane Shear Testing by direct-push methods to measure the shear strength of soils. We have two new state-of-the-art devices from AP Van Den Berg in Holland, where the torque motor and measurement transducer are at the bottom of the rods, just above the vane. This eliminates the need for a slip joint or any other form of rod friction correction, as there is no rod friction; it’s great; it’s nice to use; it’s very factual.

This type of vane is particularly useful on jobs with very soft conditions where friction corrections can "swamp" the vane torque readings, making outcomes less reliable.

The device is fitted with a computer controlled torque motor so we can precisely control the vane rotation speed between 0.1 and 6 degrees per second.

IGS also offers a range of vane sizes that help adjust the sensitivity of data readings for your site.

IGS undertakes our own in-house vane torque-cell calibrations. We don’t know any others in Australia who do this.

The testing process, either Australian Standard, ASTM or ISO standards, say (our words) to:

(i) slowly (6° per minute) rotate to beyond peak strength; then

(iii) continue at the same slow speed until a “uniform residual value" is reached.

At IGS we have seen hundreds, maybe thousands, of vane tests. We observe very often that if the standards are followed, nothing close to a "uniform residual value" evolves.

Values typically rise after the fast rotations then bounce or jag up & down; seldom is a nice uniform residual achieved.

Others may differ, but we sense that it’s the speed changes that cause this. Others may differ again, but we think the only reason for the rapid rotations specified in the standards is to try/perceive to save time and hence save $.

At IGS we have made many recent tests by simply continuing the vane rotations at a single constant speed until a nice steady “uniform residual value" is reached or approached.

This seems to work very much better than following the standards - see the adjacent example plot.

As can be seen on the adjacent test plot, by following the above method, the data makes sense - a peak is passed - a residual is achieved or approached, and frankly it really doesn’t take any (or much) more time overall. It normally takes about 360º of total rotation to achieve this or to asymptote to it.

Note that a properly done Vane Shear Test takes 40-60 minutes to complete, by whatever method.

As our client, it’s your choice of course, every time, but our experience indicates that the above is a better way to make a vane shear test.

Since late 2014, when we first alerted clients, IGS has made this our default Vane Shear Test method unless instructed otherwise by our client.

So far very few clients have requested we revert to the standards.